‘I’ve always held on to hope’: Cancer survivor who had a hysterectomy at 25 opens up on her search for a surrogate mother to carry her children

A woman who lost her uterus and ovaries to cancer when she was just 25 has spoken of her quest to become a mum.

Venera Wilson, now 30, from Sydney, NSW, lost all chance of becoming pregnant after a hysterectomy to remove an aggressive uterine cancer five years ago.

Determined to be a mother, Mrs Wilson froze four fertilized embryos before the procedure in the hope she would find a surrogate to one day carry her children. 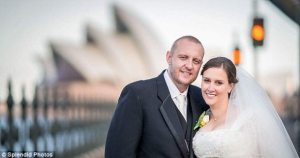 Five years since she lost her uterus, Mrs Wilson and her husband have decided the time is right to try for kids.

The decision has been brewing since 2012, when husband Dan agreed on the spot to help his partner have children – despite only having known her for nine months at the time.

‘We had been together for nine months and he was in the navy, which meant it took a lot of effort to keep our relationship going and we got quite serious quite quickly,’ Mrs Wilson told Daily Mail Australia.

‘Saying that, I was still surprised when I went to see the IVF consultant and he [Dan] agreed on the spot to help me out with the embryos.

‘I was beyond belief that he would do that for me. Wow. Dan decided that if the worst came to it and we split up, he was still prepared to be a donor.’

At the time the fertilized embryos had a 50 per cent chance of pregnancy success, while freezing unfertilized eggs had a success rate of just five per cent.

‘Extremely positive’: Mrs Wilson said she was blown away when her husband Dan offered to help in her search for a surrogate 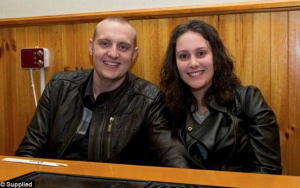 Mrs Wilson’s battle with uterine cancer began at the unusually young age of 23.

‘When I was diagnosed at 23 we were under the impression that it was a hormonal cancer and quite stable,’ she said.

‘My case was quite unique. It doesn’t usually happen to people my age. The doctors figured I could find someone, have a child and then have a hysterectomy.

‘This was the case for about a year and a half then, all of a sudden, it was like the cancer woke up.

‘It was a huge shock. I remember yelling hysterically at the doctors that I didn’t want the hysterectomy.

‘I didn’t really understand at the time that if I didn’t get it, I wouldn’t be here right now.’

Well aware that finding a surrogate mother would be an arduous process, Mrs Wilson and her partner recently decided the time was right to begin their search.

‘The thought of finding a surrogate was starting to really get me down, but Daniel said I should go ahead and put it out there,’ Mrs Wilson said.

‘Half of my friends didn’t even know I was going through this. But the response has been extremely positive and helpful.’

After posting her story on Facebook, a number of kind-hearted strangers had been in touch to offer support, she said.

‘I’m quite overwhelmed with it all. I’ve read that people do this, but it’s usually a family or a friend. These are complete strangers.’ 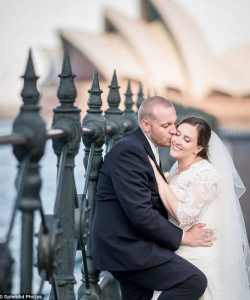 Australia’s restrictive surrogacy laws had made the process extremely difficult so far, she said.

However, she was confident that she would eventually fulfil her dream of one day becoming a mother.

‘I’ve always held on to hope because I thought that if I didn’t everything would crumble.

‘I’ve got four embryos. It’s not like I’ve got nothing.’